Considered a central figure of the Franco-Flemish school, the composer Josquin Desprez is believed to have been born in the 1450s in Hainaut (modern-day Belgium); he died in 1521.

He worked successively for René d’Anjou, king of Naples and of Jerusalem, King Louis XI of France, Duke Galeazzo Maria Sforza in Milan (where he met Leonardo da Vinci who painted his portrait), Cardinal Ascanio Sforza, Matthias I of Hungary (Matthias Corvinas), Pope Innocent VIII in Rome, King Louis XII of France, and finally the Duke of Ferrara, before returning in 1504 to his home region of Condé-sur-l’Escaut (in northern France), where he became provost of Notre Dame.

Described by his contemporaries as princeps musicorum, “prince of musicians”, Josquin Desprez is best known today for his religious works – masses and motets – which have been widely performed and recorded. Surprisingly, performers appear to have neglected his chansons, apart from the ones for 5 and 6 voices published posthumously by Tielman Susato of Antwerp in his Septième livre of 1545; but some of those songs were not written by Josquin Desprez – both during and after his lifetime, it was not uncommon to use Josquin’s name to sell more copies!

Doulce Mémoire’s concert and recording project will focus more particularly on Josquin’s first creative period, when he inherited the entire tradition of the area controlled by the Dukes of Burgundy where he grew up, an area that saw the birth of other great names of the fifteenth century, such as Pierre de La Rue, Marbrianus de Orto, Gilles Binchois and Johannes Ockeghem.

Diverse in their languages and themes, these chansons provide a delightfully varied programme, passing from the serious to the tender to the brazen, and testifying to the matchless art of Josquin Desprez, also identified as Gossequin de Condet (of Condé-sur-l’Escaut). He inherited the great musical tradition of that northern region – a cradle of the fifteenth-century art of counterpoint – and for two centuries his fame remained intact throughout Europe. With Leonardo da Vinci, Josquin was one of the first artists to be fully aware of his own value and capable of speaking as an equal with those in power. Music historians agree that, like Beethoven in the nineteenth century, he represents a major link in the history of music. Let us pay tribute to this great genius who passed away five hundred years ago: Josquin Desprez. 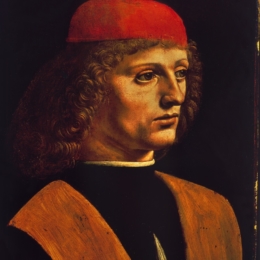