Many of Leonardo da Vinci’s contemporaries mention his love for music. As well as for his many other talents, he was famed for his accomplishments as a musician, who would improvise admirably on the lira da braccio.

His codexes also contain musical rebus, sketches of hybrid instruments, and acoustic reflections that testify to his abundant and permanent research on music.

This passion for music also stems from his youth, from his association with musicians in painters’ studios. In his youth, his first teacher in Florence, Verrocchio, was also a musician like many painters of the time. You have to imagine the atmosphere of this studio where Boticelli, Le Perugino, Ghirlandaio, Lorenzo di Credi were working… the artistic emulation, the instruments that are there – lute, lyre, songs – in short, music is everywhere.

For this concert, we set out in search of the hidden music of Leonardo’s paintings: music corresponding to his chosen themes or to his poetic world. Thus we present works composed by his contemporaries. Our approach was scientific, aiming to discover the music he may have heard, and also imaginative, in an attempt to see inside the mind of this great polymath.

Unpublished pieces by the composers Tinctoris, Agricola, Heinrich Isaac and Tromboccino will be performed. The concert will feature the famous lira da braccio, of which Leonardo da Vinci was a talented performer. On this rare instrument, the musician does not perform written music but improvises poetry or recites the great works of Latin and Greek poets such as Virgil or Homer.

“Music, the minor and unhappy sister of painting, immediately fades away,” wrote Leonardo in his treatise on painting. Our project will seek to find it.

This program is also available in a show edition. 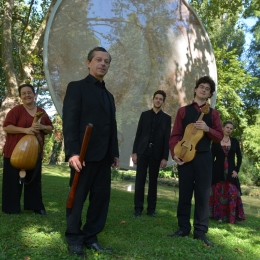