Folly rules the world, Erasmus tells us in his Praise of Folly of 1509, with her faithful companions, Self-Love, Flattery, Oblivion, Laziness, Pleasure, Madness and Wantonness.

Love, blinded by Folly, can no longer move without Folly as his guide, the poetess Louise Labé tells us in her Débat de Folie et d’Amour of 1555.

Our programme depicts amorous Folly in Renaissance times through French court composers from the time of François I to that of Henri IV.

In this programme we look at things from a woman’s point of view. She sings of the Folly of abandonment in Je suis déshéritée puisque j’ai perdu mon ami by Pierre Cadéac, a song showing a simplicity and charm that are typical of the Parisian style that was practised at the Valois court.

Folly in the country is illustrated by the ambiguous games of shepherds and shepherdesses.

There is Folly in confinement, when parents shut their daughter away in a convent.

And Folly in love, the theme most commonly celebrated in Renaissance times, to texts from Ronsard’s Amours. Then finally the Folly of eroticism, which is very much present in the ribaldry of Renaissance songs, their double meanings underlined by the music.

All these songs were of course more accessible to the general public through the recent invention of music printing, so not only members of the nobility, but also ordinary citizens were able sing them at home, either in polyphony, or in a small group, with a lute, spinet or flute. 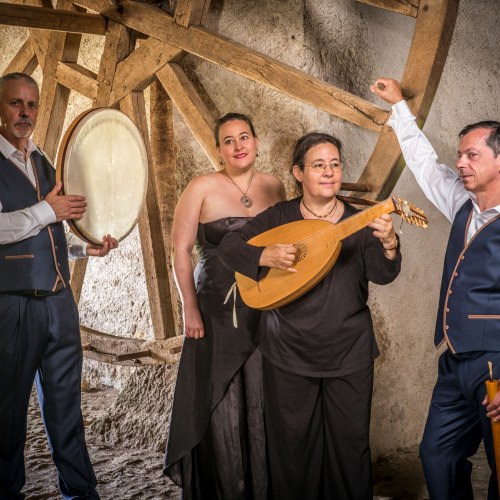